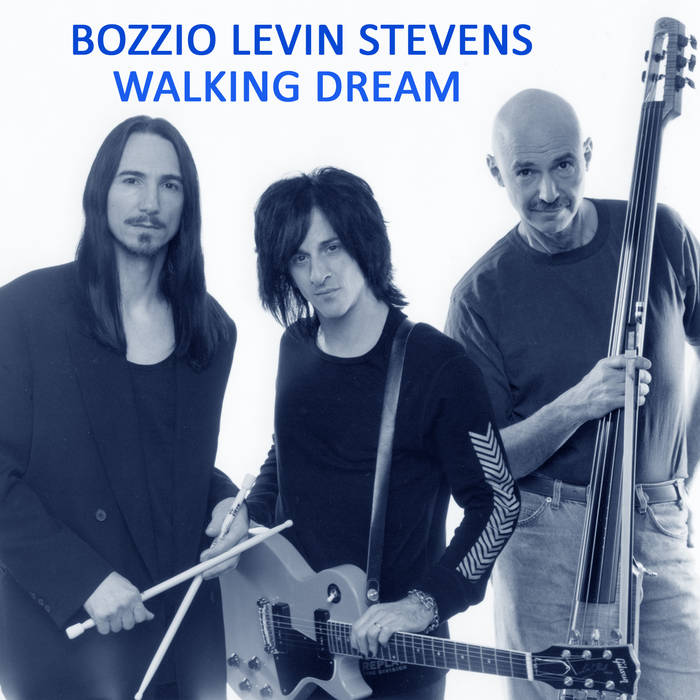 A collection of tracks that were not on "Black Light Syndrome", and the 2 remix tracks done for the Vapourspace album.


Magna Carta is proud to release of “Black Light Syndrome”
from the highly acclaimed musical marriage of Bozzio Levin
Stevens. Having been associated with world class projects
throughout their individual careers Terry Bozzio (Frank
Zappa, Jeff Beck, Missing Persons), Tony Levin (King
Crimson, Peter Gabriel, John Lennon) and Steve Stevens
(Billy Idol, Michael Jackson, Grammy winning movie
soundtracks) have joined together to make a remarkable
record which was composed and recorded in a spontaneous
and dynamic style. “Black Light Syndrome” was the product
of 4 very intense days in the studio and the results could
only have been achieved by musicians the stature of Bozzio
Levin Stevens.

The three master musicians recorded a few tracks which did
not make it on the "Black Light Syndrome album.
And now for an unreleased gem: “Walking Dream” from Bozzio
Levin (and a tacet) Stevens. Levin gently chords while
Bozzio strays lightly to the surfaces of his cymbals and
metal percussion. The duo nudges and probes, careful not
to sever the tenuous nocturnal thread.

“T & T Vignette” is a treat, an unreleased track from the
Black Light Syndrome sessions, featuring Levin and another
pioneer, Terry Bozzio, who together create a probing
collage of sounds.

Here’s a treasure, an unreleased track from the Black
Light Syndrome sessions: “Roadside America Medley.” Steve
Stevens sets up a dreamy, slide-y vamp, broken only by an
ostinato from Levin and light percussion from Bozzio.After
a few minutes the trio steps up the energy, with Stevens
alternating between sharing Levin’s ostinato and going
into solo flight;meanwhile Bozzio mixes it up, displacing
the backbeat and stating strict time. By the six-minute
mark, Stevens has forgone the languid guitar texture of
the intro and is full over-drive.


“Melt” indeed! Re-mix wizard Mark Gage assembles and
convolutes sonic bits, recreating a compelling mix of
Bozzio, Levin and Stevens. It’s effective in preserving
the essential melodic components of the original, yet
allows Gage to “paint” in the manner of Salvador Dali,
creating lumpy forms, soft transitions, and segues where
none hitherto existed.

“Dark Corners” is a remix from the Bozzio Levin Stevens
album Sonic Residue From Vapourspace produced by Mark
Gage. Vapourspace’s Gage captures the symbiosis that is so
integral to this ensemble and spotlights the sonic side
trips to the nether regions that provide a foil to the
pressing rhythmic motifs.

Mark Gage (who works under the name “Vapourspace”) was
enlisted to create new music from the existing master
tapes. Gage went through numerous Magna Carta releases
searching for the tracks that he wanted to remix for this
project. One year later, Gage emerged from Vapourspace
with an album based on the original works but sounding
radically different. Yet, throughout all his changes to
the original tracks, he never added new performances using
only the source material provided altered with his mastery
of studio technology.

Gage has a hard time putting a label on the Vapourspace
sound, but "neo-classicist electronic" is a term he thinks
comes pretty close. He is also quick to point out that he
is not a "DJ". His song “Gravitational Arch of 10” from
one of his early albums was labeled as one of the most
important electronic tracks of the last decade by URB
Magazine. Yet, Vapourspace relies on the original
performances and a radically different perspective of what
music can sound like.

One of his most daunting tasks was choosing which songs
from the considerable Magna Carta catalog Gage felt he
wanted to use for his remixes. But after pouring through
CD’s for a month or so, Gage found tracks that he thought
would respond to the Vapourspace treatment.


Next up are two songs by Bozzio Levin Stevens. The first
is "Dark Corners". The original version is a fierce, but
tasteful, jam that is very King Crimson oriented. As Gage
presents it, it has a mysterious quality and actually
feels a bit playful at times. It is much less hard-edged,
and more percussive and electronic. It has an almost
bouncy texture.

The original version of BLS’ "Melt" is quite relaxing and
fun in texture. With Gage’s handiwork, this one becomes
one of the more unusual cuts on the album. It starts with
a very weird sounding texture. By selectively removing and
reworking certain layers, though, the piece actually seems
more hard-edged than the original in places. Gage reworks
a song that was in a less serious mode transforming it
into one of the more powerful numbers on the CD.

Bandcamp Daily  your guide to the world of Bandcamp

Featured sounds from Fly Lo and Ahmed Idris, plus Mother Nature hops on to drop off new project